Our main objective in this project is the development of the vehicle. 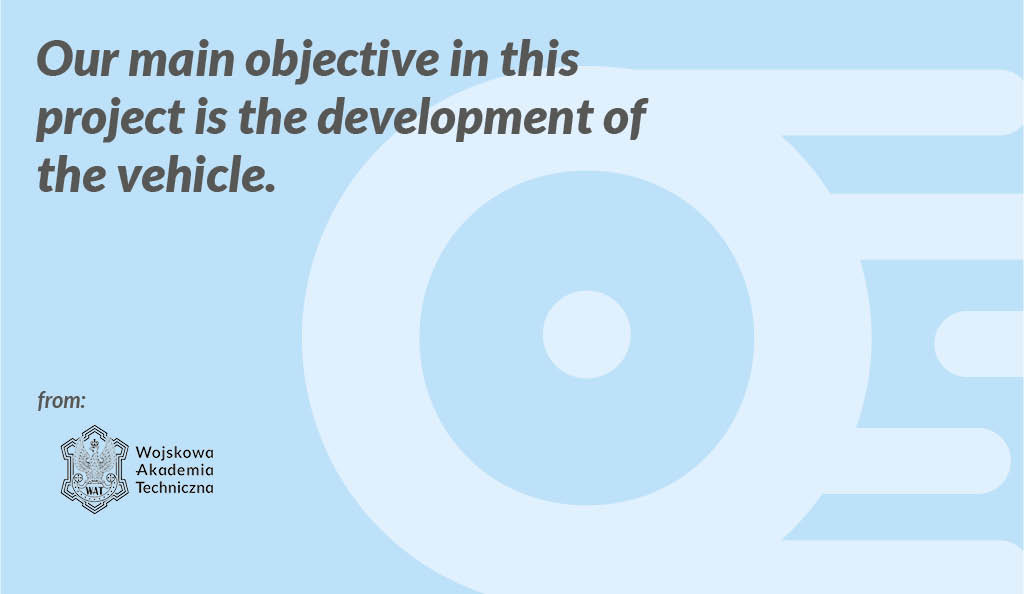 The Wojskowa Akademia Techniczna (WAT) – Military University of Technology in English – is a public university operating since 1951. As a public institution supervised by the Minister of National Defense, the Academy educates students and conducts research. The excellent reputation of the University provides highly qualified staff, including about 90 professors, 130 associate professors and 460 doctors. The Academy conducts research, implementation, and modernization at the field of technical and military science. About 50% of the total University budget comes from various research projects and industry services. This makes WAT more like a conglomerate of research centers than just a higher education institution and gives credibility for its capability to implement research projects.

Leonardo project Is conducted by team from Faculty of Mechanical Engineering dealing with mechanical design and numerical simulations of mechanical structures. Scientists involved in the project has both scientific records, but also long history of cooperation with different industries solving different real-world engineering problems. As a result, WAT team utilizes advanced numerical tools and sophisticated methods in the design process but keep Industrial perspective on effectiveness and reliability of proposed solutions.

Could you describe the role of WP… in Leonardo concept?

The main objective of the WP3 is to develop the vehicle, manufacturing the mechanical parts, integrating the developed and acquired components and doing the complete assembling to build prototypes of the vehicle both to run preliminary internal tests, as well as to conduct field tests in ROMA, EILAT and in the other 2 cities. An important phase in this WP is the revision of the vehicle design, carried out at various stages, which will bring the vehicle to TRL 8-9.

Which are the main challenges faced by WP….?

The main challenge faced by WP3 Is to make running full-scale prototype of Leonardo scooter. Moving from 3D modelling, subassemblies testing toward manufacturing of the entire vehicle Is always challenging task. Last, but not least, this Is the moment where manufacturing abilities, existing machinery and similar constraints must be considered.

Which will be the outcomes of this WP?

WP3 spans over the project to allow to acquire outcome from the field tests and implement them into vehicle design. Owing this fact, it will be possible not only to manufacture the vehicle, but also to make the vehicle design mature, after running at least three optimization loops after different stages of field tests. As it was mentioned, the goal of the WP3 Is to get to the TRL 8-9. In other words, to have almost market-ready product.

How do you expect that Leonardo will change current manufacturing processes?

The main idea behind Leonardo vehicle Is to have light, affordable and cheap in production tool for personal transportation. Having this in mind it should be pointed that this means usage of known, proven technologies rather than testing new production methods. This applies especially to mechanical part of design and manufacturing.

On the non-mechanical part Leonardo utilize innovative concept of battery sharing. We believe that the concept will help to address one of the emerging problems connected with personal scooters: vehicles abandoned on sidewalks.

Leonardo is supported by the European Union. Have you participated in more projects funded by the EU? How do you evaluate them?

Military University of Technology, as a higher education institution, takes part in many projects funded by European Union. Overall opinion of this source of funding Is that in many cases technical demands are quite high, if not challenging. On the other hand, compared to domestic funding options, administrative and management side of the EU funded projects is rather straightforward.